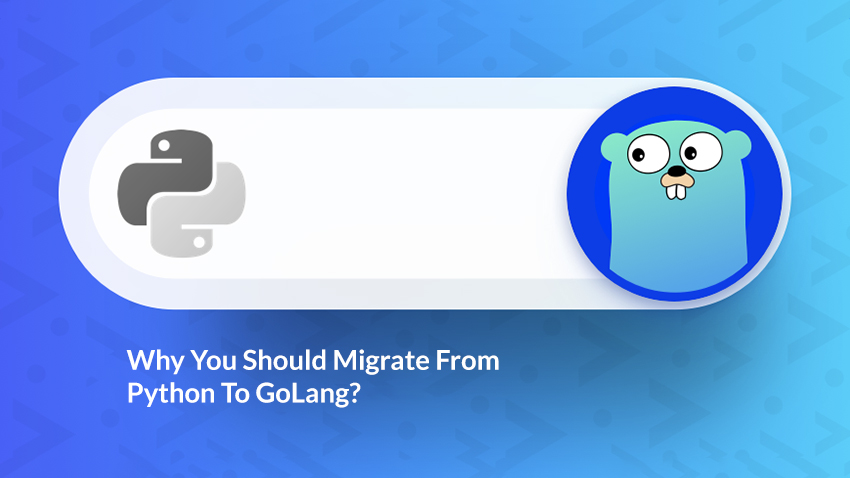 Why Do You Need A Switch From Python To Go?

There are many factors at play when you want to use a language for a project or product. Certain choices have to be made and there are obviously hard decisions that affect your product in the long run. A lot of companies are changing their core service back end from Python to Go. Reasons are aplenty and for the ones out there who are contemplating the same keep on reading to find out more

What Matters The Most Is The Performance

Go assures performance which makes it a clear winner, both at runtime and compile time. When we talk about computing benchmarks it is very much comparable to Java or C++ in most scenarios. But when we talk about real world usage, experts find that it is 30 times faster than Python.

According to the leading python web development companies in India no matter how fast your tools are or how well you optimize your technologies and other languages, what keeps you from reaching your maximum potential is Python. When you perform computationally heavy tasks such as like serialization, ranking and /or aggregation, you will find that they become more time consuming. These even take much longer than accessing a data store over the network to retrieve data from it. Switching from Python to Golang can bring that amount of time down. The application code can once again work as it was intended to.

The Go compiler is also very fast. No matter how complex a microservice you have written, when you are using Go, it will still take just a few seconds to compile it. Tools like Java and C++ are sluggish as compared to it and might even take minutes or even hours for similar builds or tasks.

If you’re new to GoLang, you will be surprised to see just how basic and simple it is. When you compare it with Python, you can see just how elaborate and creative the latter can be with the following aspects:

When you hire a Python developer they would tell you how it is fun and creative for the most part, but how it also complicates stuff for them. Most programmers agree that these features often make the code harder to understand especially when they have to read someone else’s work. Whereas when you look at Go, there’s not much to it. It just has only the basics and this makes it very easy for the programmer to read and understand anyone’s code.

Easy To Learn And Lets You Build A Team

Any leading Python web development company in India would tell you that Go is a very easy language to learn. But there are not as many Go developers around us still. Despite the fact that it provides all the basic features you need, when you compare it to older languages like C++ and Java, it still lags behind in popularity. According to StackOverflow, a respectable 38% of developers know Java, a sizable 19.3% know C++ and a mere 4.6% know Go. The new concepts introduced by Go are the “defer” statement and “go routines” and channels. Your existing Python, Elixir, C++ or Java development team members would easily get acquainted with Go within a month because it’s just so simple. You’ll find it easier to develop a Go team than for any other language.

The Ecosystem It Offers

Go is still a relatively newer language and like pointed out earlier roughly 5% of programmers know it. Building a team of Go developers is much simpler because it is very easy to pick up. The built-in libraries in Go are well thought out and very powerful. One can create an HTTP service using the ‘net/http’ package within it. It just takes a few lines of code and you’re done.

Gofmt lets you format your code. It is an awesome inbuilt command line utility. It comes with the Go compiler and is very similar in functionality to Python’s autopep8.

Golang also has strong support for protocol buffers and gRPC. You can use these two tools together for building microservices where communication via RPC is needed. Just a manifest needs to be written where the RPC calls will be defined including the arguments they take. This manifest then automatically generates both server and client code which is very fast and has a relatively smaller network footprint and of course it is very easy to use.

Final Words
Before you hire a Python developer, know that Go is indeed a great language for writing microservices but it too has its cons or disadvantages at times, which will get to later. It is still a very fast language, and its native concurrency primitives are excellent at what they are meant for. It has robust support and assistance tools and is very simple to work with. Writing Go might take more time when compared to scripting languages like Ruby or Python, but its primary advantage that sets it a class apart is its maintenance costs which are far lower than any other language.